IE7 RC1 has gone public. And according to the IE Blog, there were quite a few bugfixes. Kudos for that! It will take a while before we can actually drop support for IE 6, and I think this applies to the most of us, since some even still support IE5 for mac..

So I decided to give it a try.. Installation was a bit tricky, because it didnt complete the first time I tried it and the second time it took around 20 minutes to complete.. After the reboot it would hang when i tried starting it, but when I started it ‘without add-ons’ it worked. Sadly I won’t be able to use it because the ‘manage add-ons’ is grayed out so I can’t disable the troubling add-ons.. And no add-ons, means no flash..

I wanted to run IE 7 through the acid2 test and see if it would be any better than the last versions.. Here’s the result (click to enlarge): 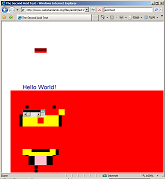 As you can see, although the Internet Explorer team fixed a lot of bugs, it’s not quite yet near to standards… although it is a lot closer than the previous version.

Firefox still has some bugs too, right now the only browsers that are fully acid2-compliant are Opera 9 and KHTML-based browsers such as Safari and Konqueror.