I was on a trip to NYC, and the internet addict in myself decided I better take my macbook with me while doing some of the touristy stuff. I must have not been careful enough, because when I opened up the laptop later on I ended up with this: 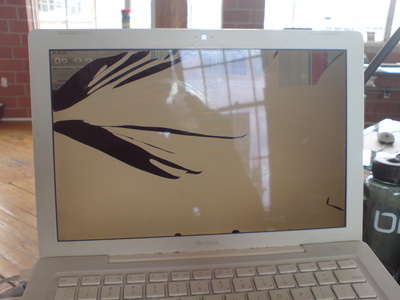 My LCD screen is completely gone, except a small area in the top of the screen. I got the 3 year extended warranty, but browsing around on some of the forums out there it seems like Applecare doesn't cover broken LCD's :(.

Oh well, I'll be going to the apple store at 7 tonight, lets see what they say..

Update: Unsurprisingly, they didn't want to fix it. The bill was going to be 563 CAD for the parts, + an estimated 200 CAD for the actual repair, ending up at around 900 dollars including tax. I got a first generation cheap macbook at the time, and was not really happy with the HD space, so I decided to buy a new 250GB model, and I'll be using the old one at work, as a desktop. This way I'll also reduce risk of breaking the new one by carrying it around. Still an expensive joke though..

Later on I also figured it might have been the heat. I've been walking around with the mac in downtown manhattan for hours on a really hot day in a black backpack, and the screen part was pretty warped as well.. So another lesson is to not do that :)